Font for Dyslexia Research: OmoType and Other Fonts 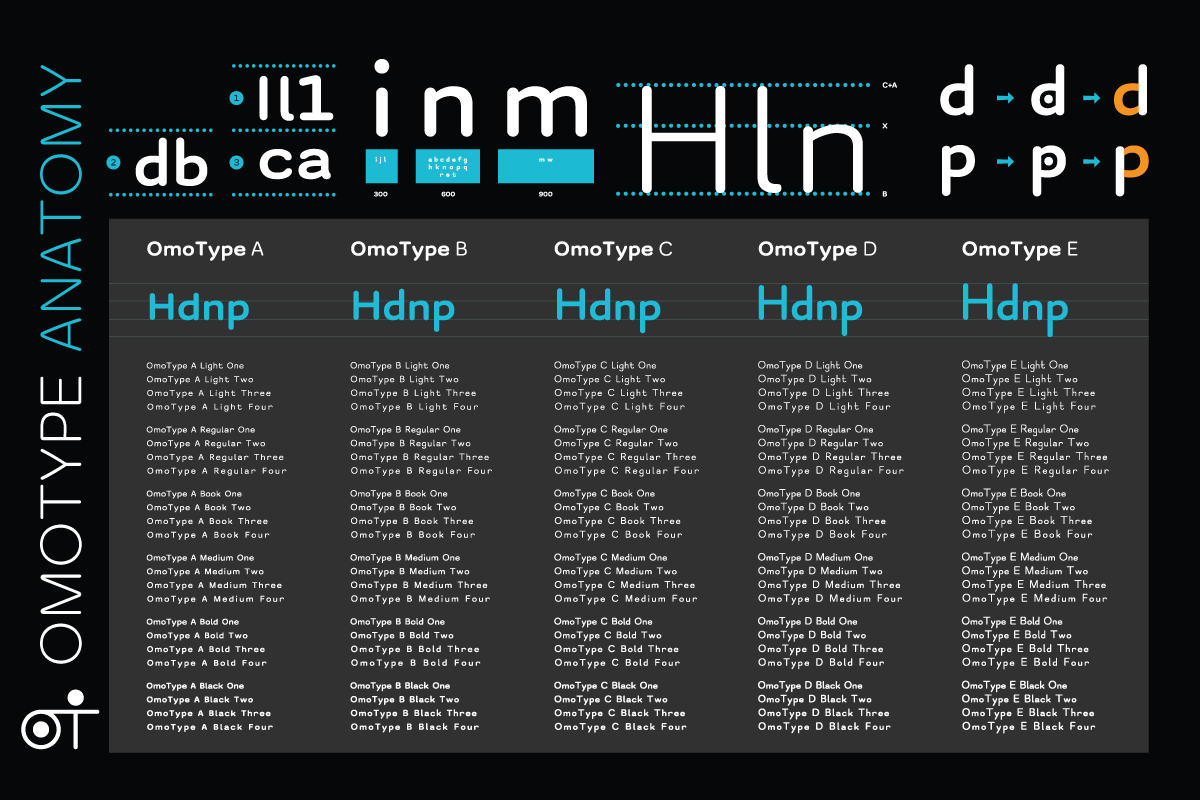 The results show that children with dyslexia are able to read with a greater degree of accuracy when the OmoType font is used. They read faster and made fewer mistakes. The OmoType was the highest rated font for dyslexia.

The motivation behind the efforts invested in developing OmoType font system is that not a single available font of that kind has truly proved effective, or friendly for that matter, in addressing the reading issues dyslexic individuals face.

There are a few fonts regarded as dyslexia friendly, and two, in particular, have in the past decade gained prominence and media attention – Dyslexie font and OpenDyslexic.
Both of these share the same basic features; they use thicker lines at the bottom part of the letter, and accentuate differences between similar characters (b and d, p and g and q) so as to prevent mental rotation of letters. Another feature is the larger ascender, the portion of the lowercase letters, such as k, b, d, h, t, above the body of letters a, c, e, m, n, o, r…, and finally, the equal size of uppercase and lowercase letters. 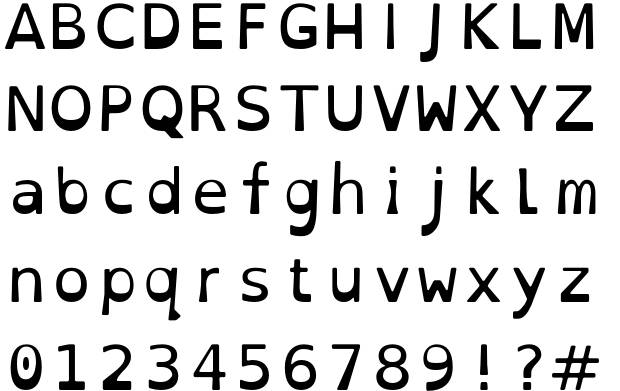 So far no conclusive evidence has been found, or none that we are aware of, that these fonts deliver any reading gains to people with dyslexia. In fact, the only research done on the effect of various fonts on reading performance of dyslexic individuals, Good Fonts for Dyslexia, showed that the use of Open Dyslexic (Dyslexie Font was not included in the study) did not help the participants to read with greater ease or speed and that they, in fact, expressed greater preference for Verdana and Helvetica fonts, which are present in everyday use as they are commonly installed font files on almost any computer.

Even though both fonts do have some features with proven benefits, which we also included in designing the OmoType font, their predominant properties render them hardly employable for the purpose. The underlying cause of this is that the mental rotation effect is only one of the effects obtained for dyslexics. Tracking, the ability to follow along the line of the printed text, becomes increasingly more difficult when these fonts are employed.
Furthermore, dyslexia is a highly individual impairment, and problems with mental rotation of letters or letter reversal do not necessarily occur as a rule in all cases of affected individuals. Some exhibit problems with distinguishing letters p and d, others have issues with r and n, or p and q, whereas some do not report any problems with letter reversal, or if they do, it appears to be merely transient. Therefore, it does not seem wise to “deform” all these letters in order to avoid mental rotation of only two or three particular letter characters, especially considering the fact that changing font to such a degree makes it stand too far apart from the standard, widely used fonts.

As of recently, EasyReading, a new dyslexia friendly font, became available. As is the case with the previously mentioned fonts, EasyReading also employs some features that have so far proven beneficial. Accentuated extenders, parts of letters extending either above or below the body of the letter, make the printed word more easily discernible, thus enabling a dyslexic person to distinguish a particular letter. However, due to inconsistencies in the design of letter characters, the resulting printed text is fairly messy, and hence, quite illegible.

Measurable benefits of EasyReading font were proven by scientific research that involved an impressive number of participants whose performance was significantly improved when EasyReading was used in comparison to Times New Roman (which were, in fact, the only two fonts included in the study). Even those mildly interested in dyslexia are well aware that serifed typefaces, an example of which is Times New Roman, are known to be much less legible than sans-serif font families.
For instance, Ariel and Helvetica, widely available fonts, are much easier to read in comparison to Times New Roman. The rationale behind opting for Times New Romanto serve as grounds for comparison, and to thus prove the efficacy of EasyReading remains unclear.
In addition to these, there are other fonts for this purpose, namely, Read Regular, Sasoon, Sylexiad, Lexia Readable and Barrington Stoke. In terms of design approach and their effectiveness, their particularities are unremarkable in the context of what was mentioned already. 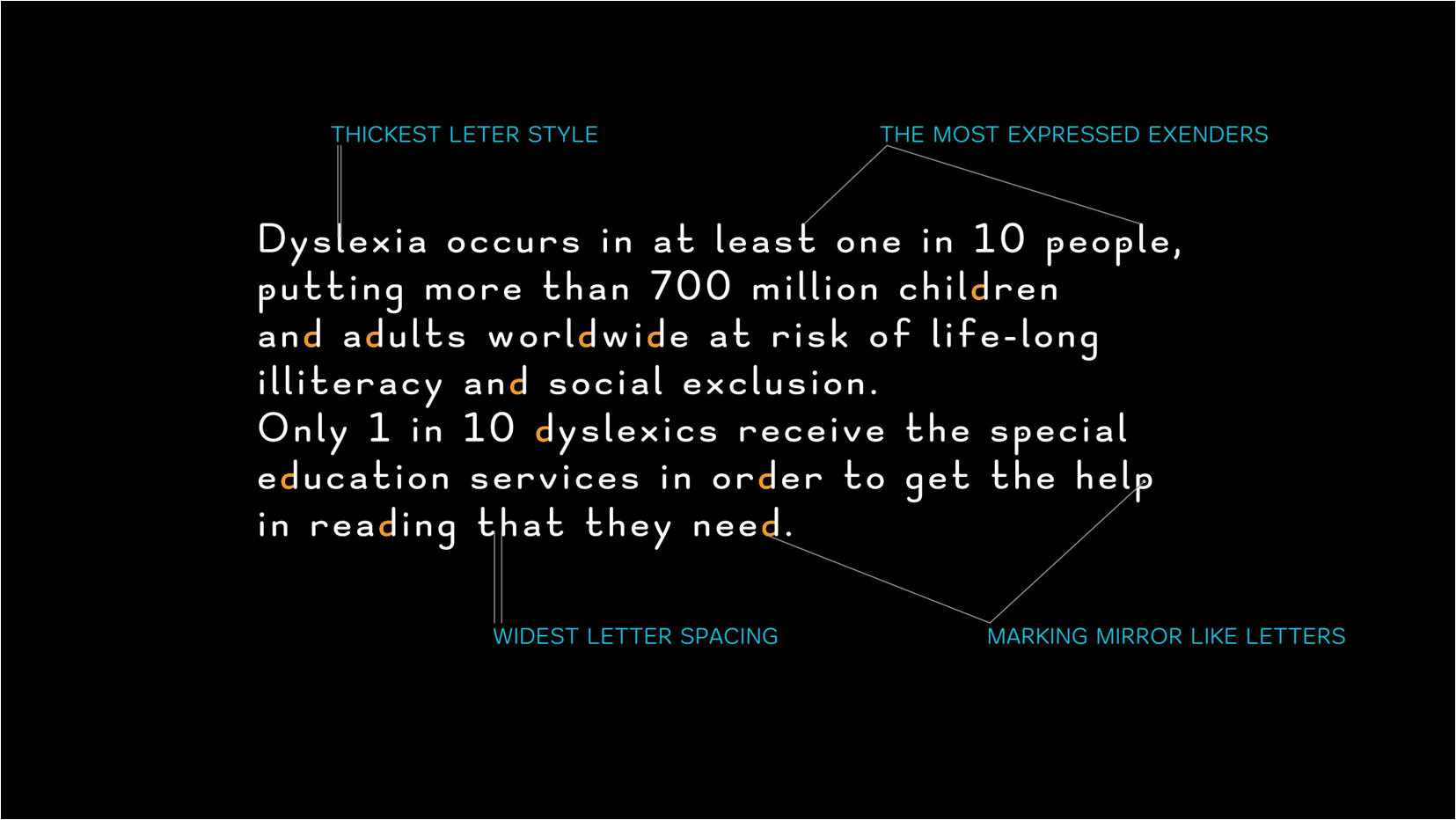 What is it then that makes OmoType so special by comparison? First of all, it is the multidisciplinary approach applied in its design, which resulted in an appealing typeface that differs from standard fonts in the least possible degree. Secondly, two separate typeface families, with 24 versions each, leave plenty of room for adjustment to individual users’ needs. OmoType Std and OmoType Ext font systems address the requirements of users with different levels of reading ability.
In its development stage, OmoType was tested on a group consisting of 15 children with reading disabilities, aged 10-14. The study was conducted by Nina Kupusovic, a speech therapy specialist, in cooperation with Dyxy, a county-level organization for children and adolescents with reading and writing disabilities, and Children’s Clinic in Split. Fonts used in this study were Times New Roman, Arial, Dyslexie Font, and OmoType Std.
The results obtained showed that children with reading disabilities are able to read with a greater degree of accuracy when OmoType font is used, and that, based solely on its visual appeal, OmoType was awarded an average rating of 3.54 (on a scale of 1-4, 4 being the highest rating).

The outstanding testing results of OmoType font notwithstanding, it is important to note that only one version of the OmoType Std font was included. Applying adjustments to fit individual needs would certainly lead to even more impressive findings.

OmoType Is Free For Personal Use

OmoType font for dyslexia is going to be subjected to further testing in collaboration with the Faculty of Education and Rehabilitation Sciences in Zagreb.  The full potential of these fonts is achieved with the use of Omoguru dyslexia friendly mobile application launched in the second half of November 2019, web accessibility widget ReadAble launched in 2020 and Lexie web application launched in March 2022.

OmoType Std and OmoType Ext fonts for dyslexia are available to end-users completely free of charge.

OmoType - The Leader Among Dyslexia Fonts